It now handles albums by everyone from Lucie to Lana del Rey, but since 1929 the mainstay of SUPRAPHON RECORDS has been classical music. Here are six of the best classical releases from perhaps the most famous Czech record label of them all…

Bohuslav Martinů was the dominant Czech composer of the mid-20th century. Written in 1944-45, both of the symphonies here echo the tragedy of World War Two, but the 4th also bursts with Beethovenian optimism in all the right places. Václav Neumann conducted arguably the definitive recording of all six Martinů symphonies in the late 1970s. Buy Nos 3 and 4 here.

Listen to the first movement of MARTINŮ – SYMPHONY No 3 here on YouTube.

Listen to the 4th movement of MARTINŮ – SYMPHONY No 4 here on YouTube.

Not as well known as his New World Symphony, but Antonín Dvořák‘s 3rd shimmers with invention and dynamism, brought expertly to the fore on this vintage recording by conductor Václav Smetáček. The long slow middle movement had to be split over two sides of vinyl, but you won’t have that problem with the download, which can be bought here.

Listen to the first movement of DVOŘÁK’s SYMPHONY No 3 here on YouTube. 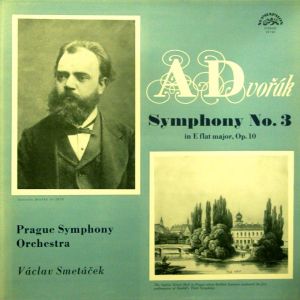 Along with Debussy and Ravel, Leoš Janáček helped change the demeanour of solo piano music in the early 20th century away from lush, vivid romanticism to a more concise, fleeting, impressionistic tonal language – and ‘On An Overgrown Path’ is his crowning achievement at the keyboard. The complete work can be bought here.

Listen to movements from JANÁČEK’s ‘ON AN OVERGROWN PATH’ here on YouTube.

In recent years the baroque period instrument movement has revived much neglected music from the 17th and 18th centuries, and Prague-based Musica Florea have certainly done their bit, not least with this cultured recording of concertos by Antonín Reichenauer. Buy it here.

Listen to one of REICHENAUER’s CONCERTOS here on YouTube.

It may be one of his lesser known early pieces, but the Festive Symphony is an intriguing precursor to Bedřich Smetana‘s later mature style evident in the more famous ‘Ma Vlast’ symphonic cycle. And Karel Šejna‘s emphatic, focussed conducting does it justice. The complete work, coupled with overtures by Dvořák and Škroup, can be bought here.

Listen to movements from SMETANA’s FESTIVE SYMPHONY here on YouTube.

The only non-Czech composer on this list. And just as Prokofiev was a giant amongst Russian composers, Karel Ančerl was a colossus amongst 20th century Czech conductors who helped forge a distinctly Czech orchestral sound in the 1950s and 60s: iridescent strings, sinewy phrasing, razor-sharp percussion and electrifying emotional tension. This acclaimed recording of scenes from Prokofiev’s timeless ballet burns with raw emotion. Buy it here.

To buy downloads from Supraphon go to Supraphonline.cz (Czech language only)